For a Landscape Photographer, the Instinct to Protect the Environment is Natural

Our attitudes in life are often shaped by seminal experiences, things that may be Earth-shaking to us and virtually invisible to others.

When I was a very small boy growing up in rural Appalachia, I fell in love with the mountains. They were more than the place where I lived, they were my roots, they were part of my identity. They were also a major source of income for the mining companies, which literally stripped the coal from the Earth, often removing entire mountain tops. I’ll never forget the day I was riding in the back seat of the car along a winding mountain road, when across the valley, I could see a mountaintop that was actively being destroyed by mining. Even at that young age, I was in utter disbelief that this was allowed. At the time, I had no concept of ecology or environmental issues. My reaction was purely visceral. What gave them the right to wreck something that belongs to all of us . . . the view?

Of course, like so many industrial activities, a ruined view was only one consequence of mining, with it’s chemical hazards, heavy metals, fly ash, stream-choking sludge, polluted waste water run-off, and toxins released into the air. Only a few years later, a river in Pittsburgh caught fire and shocked the nation into the new era of ecology.

The lessons are lost on many in modern government, who view environmental protection as an unfair infringement on the right of business to make profits, at the expense of public well-being, and sometimes at the expense of the taxpayers (who’s paying to clean up our nation’s industrial waste superfund sites? Taxpayers, not the industries who created the poisonous locations and then abandoned them).

Landscape photographers are in a position to have a unique outlook on environmentalism. While a lot of people love camping, fishing, hiking, or even just bicycling in the park, not many people spend as much time plodding through the weeds and stream beds and forests as a landscape photographer. 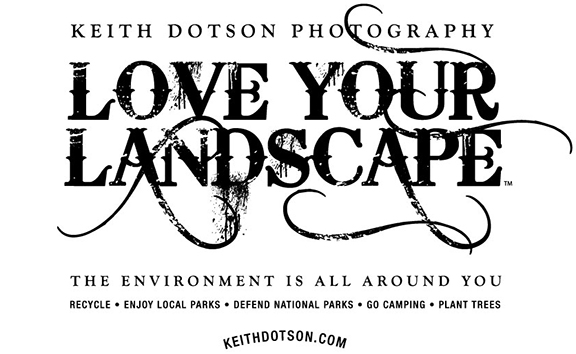 My example is the master himself. Ansel Adams was an ardent environmentalist throughout his career. While Ansel’s goal was to promote conservation of the wilderness, my goal is to help keep people in touch with the power of nature in our lives.

A landscape photographer faces particular problems. While some artists, such as the magnificent Ed Burtynsky, make powerful work based on man’s environmental devastation of nature, I try to portray the landscape in an idealized, beautiful way. I don’t try to remove all signs of humanity, but I do want the nature I depict to appear “natural.” I believe nature is healing and I want to portray it in a meditative, calming, beautiful way. It’s difficult to do that when you’re constantly faced with the intrusion of power lines, fences and walls, billboards and other ads, and the ever-present scourge of trash.

On a small scale, there’s not much that can be done about fences and powerlines spoiling a vista, but other things are much easier.

When you’re walking to find a photographic viewpoint, you tend to trudge through a lot of trash. Maybe it’s not visible when driving past at 60 MPH, but many of our rural roadsides are ankle deep in trash (at least that’s the case here in Tennessee, where we have no real functioning roadside adoption program). Often I park my car and walk for distances along the road, where I am shocked at the quantity of detritus that has accumulated, from plastic bags to water bottles to dirty diapers to discarded tires, and so much more. Some environmental problems are complex, but the amount of trash on the roads is definitely something people could change if only they cared.

Trash isn’t just a problem along roadsides. I find it in streams, river beds, and wetlands. I even find it in trees, especially those pesky plastic shopping bags.

One of my biggest pet peeves is seeing smokers tossing cigarette butts onto the ground. Not only is it disgusting and thoughtless, it’s also hazardous. A local fast food restaurant has placed a sign by their drive-through window requesting people not toss cigarettes into the mulch because it’s flammable. In dryer climates like my home state of Texas, a carelessly tossed butt can cause serious damage in grass and forest fires. I’ve personally seen many grass fires that required emergency response from fire departments caused by cigarettes tossed from car windows.

Estimates on how long it takes for a filter cigarette to degrade in nature vary from 18 months to ten years. Of course the paper and tobacco go quickly, but the plastic part of the filter is a longer term problem. That cottony-looking fiber in the filter is not paper or cotton, but is actually derived from plastic.

What I find especially heartbreaking is the senseless damage people intentionally inflict on our natural wonders and historic treasures. This is indefensible.

(Above) Ozone Falls, Tennessee looks like a pristine and primordial place, almost like no one has ever been there before. But in reality, the rock walls near the entrance to the site are marred by spray painted graffiti, and trash is often strewn though out. Above the falls, flat rocks along the footpath are marked with graffiti as well.

(Below) In many other places, rock walls and trees are marked with spray paint or deeply etched cut marks. We all want to leave our mark and have some sense of immortality, but this isn’t the way to do it.

But the most inexcusable cases, in my opinion, are the ones below. These photographs show a variety of drawn and etched vandalism over very old Native American petroglyphs at Roche-a-Cri State Park in Wisconsin. Much of the damage has been attributed to US soldiers during the mid-1800s, but some of it looked modern to me.

It’s almost unbelievable the kinds of things you stumble upon when out taking photographs among nature. People really are careless when it comes to this planet of ours.

Much like the coal mining companies in Appalachia have wantonly carved up entire mountainsides, and poisoned our air and water in the process, people who trash these places are making choices that all of us have to deal with.

Keith Dotson is a Nashville-based fine art photographer and author with a global audience. His black and white photographs have been seen in several movies and in popular TV shows including Grey’s Anatomy.

His work has been exhibited across the U.S., and is owned by collectors around the world, from L.A. to Dubai and Charleston to Canberra.

The Story Behind the Photograph: Site of the Burnt Village

Sounds of Frogs in the Woods and Wetlands [Video]