Nashville is a food city, to be sure, with world-class chefs making gourmet meals that draw food-tourists from as far away as California. It’s also the home of traditional southern “meat-and-three” cafeterias, and of course, the infamous Nashville hot chicken.

Nashville isn’t known as a BBQ city. That claim to fame goes to Memphis, but no matter where you go for BBQ in Tennessee, pork is king. Even so, I grew up in Texas, where BBQ is religion and beef brisket is the star, and this Texas-style brisket plate hit the spot! In Texas, a BBQ plate comes with a slice of white bread or possibly cornbread. In Tennessee, expect hoecakes (southern cornbread pancakes).

How many Weight Watcher points is that? 🙂

My recommendations for BBQ in Nashville

Located on Broadway in the heart of the touristy honky tonk strip since 1976, it’s close to many of Nashville’s big events and major hotels, so expect a line. But, of all the BBQ joints in Nashville, this is the most like Texas-style and, in my opinion, it’s the best. Zagat said, “The BBQ is off the hook.” Forget about finding a parking space though.

Martin’s Bar-B-Que Joint
3108 Belmont Blvd, Nashville, TN 37212 + other locations in the metro area
Website | Directions
Always crowded and always delicious, you can often watch the BBQ master smoke a whole pig in a brick pit on site while waiting for your plate. Martin’s serves pork, brisket, turkey, burgers, and even a fried bologna sandwich. 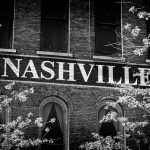 Hey, if you love Nashville, be sure to check out my big portfolio of black and white photographs of Nashville.

Keith Dotson is a Nashville-based fine art photographer and author with a global audience. His black and white photographs have been seen in several movies and in popular TV shows including Grey’s Anatomy.

His work has been exhibited across the U.S., and is owned by collectors around the world, from L.A. to Dubai and Charleston to Canberra.

Video: Tennessee Flags Waving in Nashville on a Sunny Day